One Family's Struggle With Microcephaly

In 2006, Christine Grounds gave birth to a child with microcephaly, the birth defect caused by the Zika virus that causes malformed heads and stunted brain development in children. The doctors were not entirely sure what this meant for the newborn, Nicholas Mir. This was much before the Zika outbreak that occurred this year that had spread from Brazil. Since the outbreak, the CDC estimates that there are over 2,600 pregnant women who have tested positive for Zika in the US and its territories, along with thousands more around the world. All these women may potentially give birth to children with microcephaly. The severity of microcephaly varies greatly, but one of the most difficult parts of this disorder is that is very difficult to identify until late in the pregnancy, leaving thousands of women with the agonizing choice of waiting anxiously and hoping for the best or abortion. Mrs. Grounds offered to share her experience raising Nicholas when the outbreak occurred. She describes how difficult it was in the beginning, but that Nick progressed quickly once he reached age eight. However, unlike many, Nicholas is fortunate to be able to attend an excellent private school on the Upper West Side that provides great care and has helped him get to where he is today. 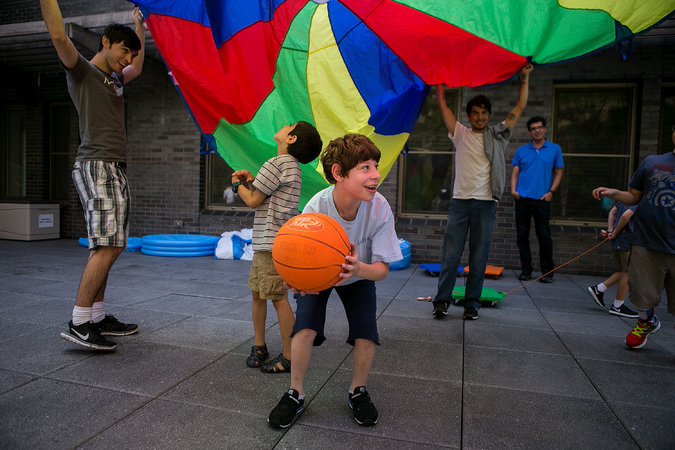 Dr. Wendy K. Chung is a director of the clinical genetics program at Columbia University Medical School and she met Nicholas for testing when he was a baby, as his parents were hoping to find answers in his genetic makeup. At first, the tests were not successful because there were not enough facts and developed science, but about three years ago, Dr. Chung finally had an answer. Nicholas was autosomal recessive for the microcephaly gene, meaning both of his parents carried the recessive gene for the disorder. They had a second child before these results were discovered, assuming that it was highly unlikely for their second child to have microcephaly as well, but as it turns out, the odds were one in four.
I thought it was incredibly helpful that Christine Grounds chose to share her story about Nicholas to help others dealing with microcephaly or facing the possibility of having a child being born with microcephaly. Because is an autosomal recessive disease, pregnant parents with the Zika virus can have the genome of the father mapped out in order to see if he carries the recessive gene to further evaluate the odds of having an affected child.
Posted by Nardin Awad at 9:19 PM