Migraines are a type of recurring headache that occurs on one part of the head. There are several types of migraines ranging in severity and can cause symptoms from nausea and weakness to temporary memory loss and speech/motor function, last from an hour to weeks at a time, and cause an increased risk of strokes. Migraines are often hereditary and 15% of adults who suffer do not respond to treatments available.

Researchers at CNRS discovered a mutation that causes dysfunction in a protein which induces migraines. Migraines are related to hyperexcitability in sensory neurons. The researchers found that a mutation in the coding causes a split in the protein with one being inactive and the other targets ion channels at K2P2.1 (a protein in the potasisum channel) which stimulates neural electrical activity causing migraines. 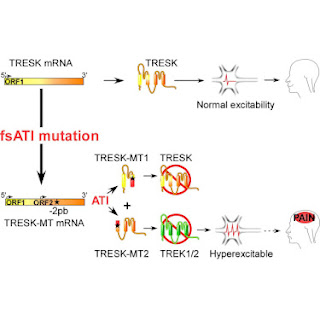 The above picture is from a study performed on mice at the Institut de Biologie Valrose in France. The diagram shows the normal pathway and the mutated pathway of the TRESK gene. In the mice with the TRESK mutation, they exhibit TRESK-MT1 and TRESK-MT2 which in turns cause hyperexcitability instead of the normal TRESK and normal excitability.

I found this discovery very interesting because I am among the 15% of the population that does not respond to migraine medications and treatments. Medications for chronic migraines are typically anti-depressive or anti-epileptic, usually beta-blockers, calcium channel blocker, or serotonin blockers, which both can worsen migraines and cause unwanted side effects. The discovery that a mutation in the potassium channel is related to migraines allows for a further understanding of migraines and can lead to a more effective drug to be developed.