When you first see Tasmanian Devil, you probably start to think about Taz from the Looney Toons. Just like the fictional character, the Tasmanian Devils are very aggressive and are known to attack one another. A carnivorous marsupial from the island of Tasmania off the coast of Australia, the Tasmanian devil has seen a major decline and is considered endangered mainly due to the infectious disease known as the Devil Facial Tumor Disease or DFTD. In less than 20 years, the population of the Tasmanian Devils declined more than 80% due to DFTD.

Interestingly enough, some populations of the Tasmanian Devil that were thought to have been extinct by now are actually still alive. Researchers then decided to look at the genome of these animals and determined that these genes were actually protecting the Tasmanian Devils. These researchers also discovered that these genes were helping the immune system to identify DFTD and fight back. Over the past two decades, the Tasmanian Devils seem to have been evolving a resistance to DFTD. Researchers went to the island of Tasmania and sectioned two candidate populations of the animals to view genes related to cancer or immune function. The two likely genes that have been selected for are the CD146 and the THY1 genes. Both of which are involved in immune system regulation as well as cell to cell communication and cell adhesion. Researchers thus believe that these genes are adapting to recognize the tumors formed from DFTD. 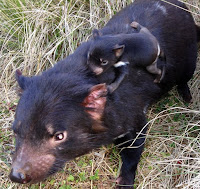 With the strong selection due to the high fatality chance of DFTD, the evolutionary response of the Tasmanian Devil to such a selective pressure is astonishing. Although this is exciting news for the Tasmanian Devil, many of its species still succumb to DFTD. The next step in this process is to determine a way in which the gene can be used to save more of the Tasmanian Devils. A proposition would be the selective breeding of unaffected individuals with favorable genotypes for detection of the DFTD in hopes of the continued survival of the Tasmanian Devil. I personally think that researchers are on the right track for helping to protect this endangered species. I also believe that they are on their way to making a great breakthrough in terms of hopefully being able to apply the way these Tasmanian Devils are able to counteract the DFTD.