The Fruits of the Ice Bucket Challenge and A.L.S

Were you one of the 17 million people who partook in the famous Ice Bucket challenge? Well if you did, you should be glad to know that you helped to raise not only awareness for Amyotrophic Lateral Sclerosis but, you also helped to raise over 115 million dollars for research into ALS otherwise known as Lou Gehrig’s disease. Very recently, researchers have been able to discover a gene that accounts for 3 percent of ALS cases known as NEK1. About 1 million dollars from the Ice Bucket Challenge was invested into a project known as Project MinE consisting of 11 countries and about 80 researchers. These researchers in turn were able to discover the NEK1 gene’s connection to the development of ALS. 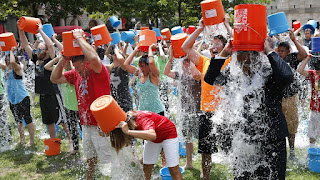 The NEK1 gene was discovered through the whole-exome analysis of over 1,000 individuals afflicted with familial ALS. The NEK1 gene discovered by researchers is very important to the nervous system. NEK1 is important in the maintenance of the cytoskeleton that gives neurons its shape and its ability to promote transportation within the neuron cells. NEK1 also has a big role in regulation of the mitochondria’s membrane. Other functions that NEK1 is associated with include cilia formation, DNA damage response, and microtubule stability. Once there is a problem in these functions due to the NEK1 gene being disabled or damaged, there is an increased chance for the development of ALS. Thankfully, now that NEK1 has been determined to be a gene of interest in regards to treating ALS, drug therapies can now be researched in targeting the NEK1 gene.


To me, I'm glad to see that something that was a viral sensation throughout the world was able to do some good in discovering genes linked to ALS. I definitely believe that more good things are to come with this research not only in discovering more genes but also through social media in ways to help fund other researcher for other diseases. Although 30 genes have been discovered to have association with the cause of ALS, finding more and more genes related to it can help broaden treatment plans for those afflicted with ALS.
(http://www.nytimes.com/2016/07/28/health/the-ice-bucket-challenge-helped-scientists-discover-a-new-gene-tied-to-als.html?rref=collection%2Fsectioncollection%2Fhealth&action=click&contentCollection=health&region=stream&module=stream_unit&version=search&contentPlacement=10&pgtype=sectionfront)