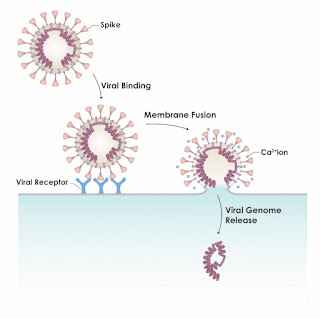 A new study was published detailing research on fragments of aniceint viral DNA that over generations has become incorporated into the human genome. Such strands of DNA are called endogenous retroviruses, and the new research explores there role protecting cells from modern viruses. The study was titled "Evolution and Antiviral Activity of a Human Protein of Retroviral Origin", and was recently published in Science. In the study the researched used 'computational genomics' techniques to scan the entire human genome looking for segments that showed a sequence indicative of a endogenous retroviruse. In total, approximately eight percent of the human genome consists of these endogenous retroviruses. This is an amazing number considering it is four times the amount DNA for genes that make proteins.

Once a retrovirus finds a cell it uses a envelope protein to bind to a receptor point on the cell's surface to enter the inside of the cell. Once inside the cell the virus can inject its own RNA which is converted to DNA and then incorporated into the cells genome. The study found one thing very important about the retroviruses inside of cells: the envelope proteins they code for are still expressed and will bind to the cell's receptors, blocking other viruses from entering the cell and thereby protecting it from infection. The main retrovirus observed in the study was Suppressyn. Placental-like cells (which are prone to infection) both with and without Suppressyn, were exposed to a virus, but only the ones without Suppressyn became infected. The presence of Suppressyn proved to be enough to block the viruses entry into the cells.

I thought that this was very significant study with many implications. I had previously never known about endogenous retroviruses but was amazed to learn how prevalent they are in the human genome, and even more so the importance they have developed. I find it pretty interesting that an ancient virus would be the thing to protect us from modern ones. With more study I wonder where this knowledge can go, and if with the right development we can find endogenous retroviruses to block out viruses that are of issue to us in the present. COVID has shown without doubt that there is a need for protection against viruses, and the applications of this study in that field can be very significant.

Posted by Forrest Jennings at 8:59 PM