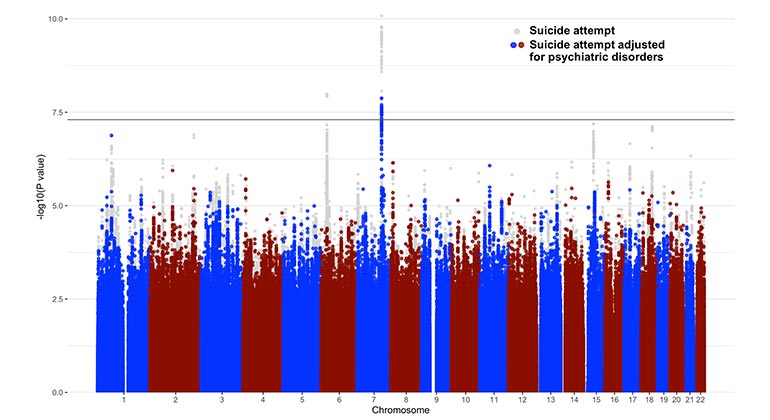 A news report from KSAT.com discusses a study done in November 2021 about how suicide attempts have a genetic link to them, and not just a genetic link of mental illness. Unfortunately, suicide is a leading cause of death in America and attempts are even higher than ever. In 2020 alone, 45,000 died by suicide and over a million attempts, meaning that every 11 minutes an American attempts to end their life. While this specific cause of death has been attributed to mental heath and their disorders, researchers at Mount Sinai in New York tried to identify a genetic cause independent of psychiatric disorders, and their findings were unheard of.

The study consisted of a genome-wide study of 500,000 people, 30,000 of which had attempted suicide, which is about 6% of the study's population. This association study was conducted by the International Suicide Genetics Consortium, and focused on looking at similarities among the human genome for those who had attempted suicide. During the study, evidence was found that the suicide attempts were consistent with psychiatric disorders and the genes associated with a higher risk of those diseases, but another result was discovered as well.

Chromosome 7 has had a lot of interest in the medical community as it is the chromosome for cystic fibrosis, polydactyly, deafness, and many other health conditions. The researchers found that there was a region located on Chromosome 7 that contain variants which could increase a person's risk for attempting suicide. The region identified on Chromosome 7 is also linked to non-psychiatric issues like insomnia and risky behaviors. This discovery paves the way for further research into this region as well as a more in-depth look at other chromosomes to determine if there are other genetic variations related to suicide independently of psychiatric disorders.

This study provides a great insight in helping find a scientific way to help prevent suicide. By looking into the genome and finding a specific region that is common in the people who have attempted suicide can lead into possible treatments or even provide a reason as to why certain people are more inclined to attempt suicide. Suicide is a horrible health problem that has affected millions of Americans and it is especially common among teenagers and young adults. This research could possibly help look into the reasoning for that along with mental health resources in order to make sure death by suicide decreases.

Posted by Arianna Buckley at 3:56 PM