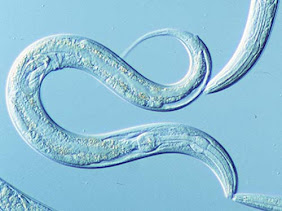 Scientists at the University of Virginia have recently identified 17 genes associated with obesity. High calorie diets covered in high-fructose corn syrup and sugar drive our obesity epidemic. Genes also play a major role in obesity by determining how our bodies metabolize food for energy. Hundreds of genes associated with obesity have been identified by genomicists, but the specific genes that cause or prevent obesity are unknown. O'Rouke and her colleagues studied C. elegans which share more than 70% of their genes with humans. These worms have been used to decipher how common drugs work. The team fed some worms a regular diet and some were fed a high-fructose diet. They screen 293 genes associated with obesity. From their obesity model, they identified 14 genes that can cause obesity and 3 genes that can prevent it. They discovered blocking 3 genes that prevented the worms from becoming obese led them to have better neuro-locomotory function and live longer. In lab mice, blocking one of the genes prevented weight gain, lowered blood sugar levels and improved sensitivity to insulin. This gives hope to anti-obesity therapies to reduce the obesity epidemic.
Hopefully in the near future these discoveries can be implemented in humans. Worms, which seem completely different from humans, provide essential information about our own DNA. More than 40% of Americans are affected by obesity, so these findings are a huge step forward in helping this problem.
Posted by Julia Ebeling at 11:37 PM