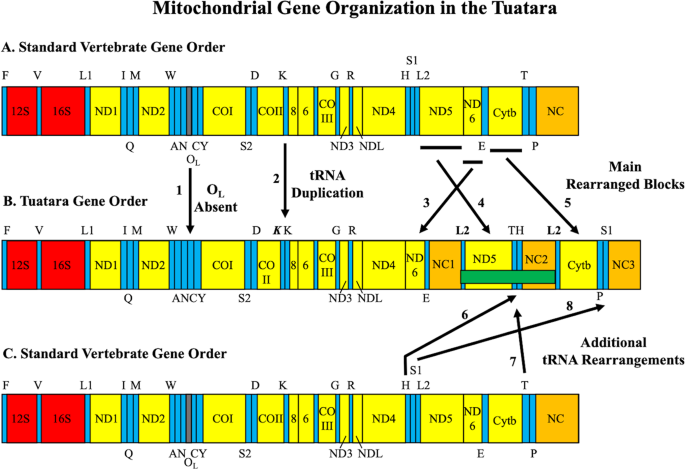 In this Science News article it states that researchers have discovered two distinct mitochondrial genomes in the Tuatara, these extra set of genes may be the reason why the Tuatara are tolerant to the cold which is very unique for a reptile. In Tuatara scientist discovered evidence of two distinct copies of genetic instruction manual for making mitochondria in a vertebrate. Mitochondria is important for building the structures and to keep them going. Finding this discovery could not only help other reptiles but humans as well when deal with different kinds of diseases. In 2012 the Tuatara Genome Project was created to decode the Tuatara's genetic makeup which was led by Neil Gemmell. The team was provided a sample of the reptiles blood and what they found was that the Tuatara's genome is 50 percent larger than the human genome.

Further investigation of decipher the DNA which they compared by chopping it into small pieces with the overall structure they found differences in the mitochondrial DNA which appeared to have striking differences in their gene sequences. This created many of the people working on the project to be stunned because usually mitochondrial DNA is inherited by the mother's egg resulting in a single copy of mitochondrial genome not two copies. They conclude that the genomes were different by 10.4 percent so when comparing it to humans and chimpanzee mitochondrial genomes differ 8.9 percent.

I think this discover is very important because if we could find the genetic basis of what causes them to have two distinct mitochondrial genomes we can help find treatments for human metabolic diseases. The picture use above is from Neil Gemmell own experiment article where you can also find a little bit more about the Tuatara.

Posted by Karlin Jimenez at 5:33 PM