Does Genetics Have an Influence on Our Actions? 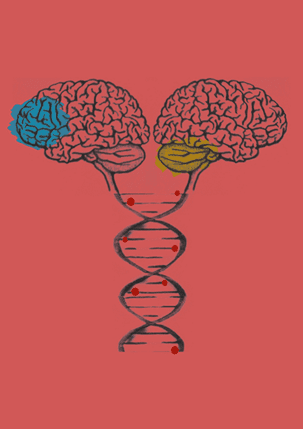 In this article posted by Genetic Literacy Project the topic of whether our genetics shape our actions was discussed. It was mentioned that mental-illnesses, vulnerability, longevity, and impulsive tendencies are some-what determined by genes. The ability to analyze a fetus's brain at 20 weeks while still in the womb was mentioned; susceptibilities for conditions such as ADHD, autism, bipolar disorder, depressive disorder, and schizophrenia could be found during this stage. Next, the topic of epigenetics was mentioned, in which the tags connected to genes are analyzed. These tags are placed upon genes and are passed onto offspring. An experiment was mentioned in which two groups of mice were exposed to the smell of cherries; however, in one group the mice were shocked when they smelt the cherries. This resulted in the offspring of the shocked mice being traumatized by the smell of cherries. It was mentioned that there has not been enough research done to relate the same trend occurs in humans. Although it has been found that descendants of US Civil War prisoners are more likely to die younger in life, and Holocaust survivors offsprings having a higher level of cortisol, which is the hormone involved in stress responses. I found this article to be very informative, and I enjoyed the researches that they shared. I agree with the information presented in this study since it was backed up with research. I hope more research is done surrounding the topic of epigenetics. I find epigenetics to be very interesting, as another it connects two of my favorite areas of science: psychology and biology.

Posted by Isabella Pisano at 12:15 AM