History and historical records can be used to learn about genetics. This lesson on genetics is brought to us by the Habsburgs, a royal dynasty that lasted from roughly 1450 to 1750. And what is this lesson you might ask. Why, incest and inbreeding coefficients, of course! To keep the “blood pure”, there was a lot of inbreeding amongst family members. The effects of this inbreeding are well documented, such as the “Habsburg Jaw”, where some of the descendants down the line (most notable King Charles II, King of Spain), had an enlarged lower jaw, which made it difficult to speak and eat. It also made King Charles II drool quite often. Another interesting piece of information is that looking at the family tree, King Charles II and Marie Antionette had such high inbreed coefficients, that their coefficients would have been lower if their lineage just had their parents as siblings! To put this into better terms, the Nature article states, “Marie Antione of Habsburg, daughter of Emperor Leopold I and his niece Margaret of Spain (sister of Charles II of Spain), had an inbreeding coefficient of 0.3053, which is higher than the inbreeding coefficient of the progeny of an incestuous union (parent-offspring or brother-sister)”. I enjoyed learning about this topic, and found it very interesting just how inbreed some of these people were. Though there are probably more important things to analyze history for this is, in my opinion, one of the more entertaining things to learn about. 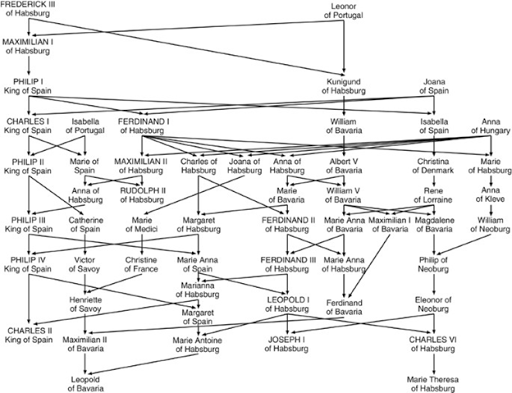