Narwhal populations are increasing but the genetic diversity of these animals haven't increased over the years. Scientists thought that there wasn't much genetic variation due to inbreeding. However, after doing studies this wasn't found to be the case. After genomes were sequenced they were found to have similar DNA to beluga whales, polar bears and walruses. The narwhal population has grown despite this low genetic diversity. What has scientists surprised is the fact that the narwhal population has thrived even though in most animals and plants that have little genetic variation they aren't able to adapt to climate change. 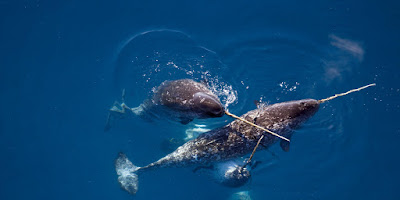 I think that this is really strange because previous research would suggest that narwhal populations would go down due to them not being genetically diverse. This makes me wonder if other animal species have low genetic diversity and are still able to do well in the wild. The research done here will be influential in population genetics and animal populations that have been affected by climate change as well.
Posted by logan at 10:00 PM