An article published in NewScientist magazine in 2008 illustrates the findings of a study that successfully cloned dead mice. The research team utilized the nucleus from cells and were injected into eggs that'd had the nucleus removed. The fact that the cells utilized were from tissue that had been frozen for over 15 years, woke up the idea that extinct species frozen in permafrost can be "resurrected". 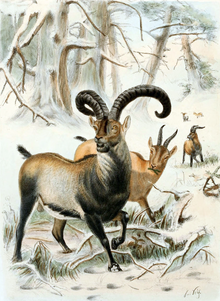 In 2009 a publication in the NatGeo site, pointed the findings of a process where the pyrenean ibex was the first extincted animal to be brought back from extinction, though it died two days after being born, (dead of organisms is common in cloning experiments). This news produced mixed feelings, since it was the first animal to survive de-extinction passed birth but also the first one to be extincted two times.
Like most genetic topics, there is controversy surrounding this one. Opposers say that people should try to find ways of preserving existing species, instead of trying to bring back extincted ones. The truth is, that up to 0.1% of the total species go extinct each year, mostly due to humans. Every species an important part of the ecosystem, and bringing them back will cause mostly a positive impact in the ecosystem they left behind; but it is also true that we have try harder at protecting the species that remain alive.
Posted by vivivalencia at 11:29 PM