An article in the New York Times discusses the findings of two studies on mutations on MC4R gene. The findings of the first study indicated genetic alterations which mutes appetite, to be directly linked to diabetes, heart disease and obesity. MC4R gene is a "G protein-coupled receptor whose distribution causes obesity." The second study used the same sample to develop a genetic risk score for obesity. The combined findings of both studies indicated a biological factor playing a role in how much one struggles with their weight. Those people feel hungrier than those who don't gain weight easily. The 20 years research led by Dr. Sadaf Farooqi indicated that people with MC4R mutations tend to be obese, since the mutation prevents the gene from working and sending a signal of fullness. Those people always feel hungry and the risk of " diabetes and heart disease is 50% higher than those without the mutation." 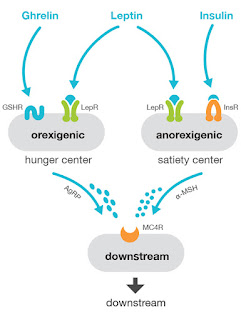 I find those findings very important since obesity and heart diseases are among the top 10 leading causes of death in the US. More in depth understanding of the genetic component to obesity could help as an early  indicator for those who are at high risk for obesity. Also later manipulation of the mutation of MC4R if possible can be used to control the genetic component of obesity.
Posted by Majda Amoni at 2:51 PM