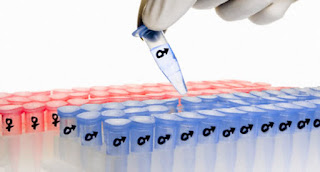 July 25, 2018 marks 40 years since the birth of Louise Brown, the first baby brought into the world by the process of in vitro fertilization. Since then, advancements in genetics have raised moral and ethical concern. For instance, pre-implantation genetic diagnosis, P.G.D, allows future parents to have their embryos tested for the probability of passing down diseases to their offspring. Some say this practice is unethical and interferes with nature. The most recent development in genetics and P.G.D was brought to attention by Dr. Jefferey Steinberg, director of The Fertility Institutes in New York. Dr. Steinberg expanded on the idea of P.G.D by introducing the opportunity to pick the child's gender and increasing their odds of their baby having a specific eye color. Additionally, Mitochondrial transfer allows women who have high odds of having a child with a severe birth defect use their own DNA and have it implanted in another woman's egg to move through the process. This was given a term called "three-parent baby". Furthermore, a gene-editing technology known as Crispr, can snip away a gene mutation. This results in the child not carrying this mutation, ultimately altering the family germ line. Overall, people are worried that "designer" babies will start to exist. More specifically, the wealthy who can afford these procedures could possibly one day chose to have a genius child or an Olympic athlete.

Many fear that this interferes with nature and is unethical. I believe that this can help many people to have a child but do feel there should be a line drawn. I find it interesting that they can pick eye color and gender but I think science should not go too far and interfere with nature.

Link to original article
Link to related article
Posted by Unknown at 4:38 PM