Rhino Embryos Made in Lab to Save Nearly Extinct Subspecies 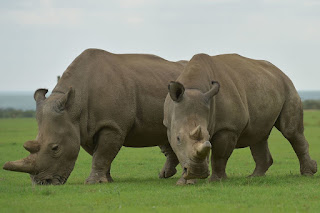 The number of northern white rhinoceros have dropped substantially to the single digits over the past decade. The few that remain all have severe reproductive issues. Hopes of regenerating the subspecies only became worse when Sudan, the last male northern white rhino, died in captivity last spring. “We thought, ‘The story’s over’,” stated Dr. Thomas Hildebrandt. However, it soon became far from over as Dr. Hildebrandt and his colleagues created hybrid embryos that can possibly be implanted into female surrogate southern white rhinos. The expectation is to see the first purebred northern white rhinos through this method in the next three years or so. However, a major downside is the likelihood of severe inbreeding in order to produce purebreds. This could cause reproductive issues for the hybrid subspecies and lead right back to square one.

Although I applaud the technical sophistication and advantages that have been made throughout this study, it is also concerning that too much technology might do more harm than good. Nonetheless, if this experiment proves to be a success, it could lead to the survival of other extinct subspecies.
Article link
Related article
Posted by Unknown at 9:04 AM