Scientists make first ever attempt at gene editing inside the body 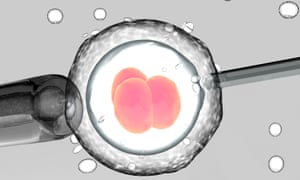 The article was published on The Guardian, scientists have tried editing a gene inside the human body. This a bold attempt to cure an incurable disease by changing a patient's DNA. The patient, Brian Madeux, who has Hunter syndrome, received billion of copies of a corrective genes. A genetic tool was used to cut his DNA in a precise spot. Signs if the procedure worked will come in a month, while tests will be confirmed in three months. If the procedure is successful, the new technique could give a major boost in gene therapy.

This was a very informative article and is interesting what the outcome of the procedure will be. I believe if this technique works and is able to benefit the individual's well being by getting rid of genetic diseases that are inherited, this could be a big breakthrough in genetics. This would create cures for other genetic diseases and to the improvement of treatments. There are scientists with opinions that do believe there could be side effects to the procedure or that it might not work. There has not been enough studies on the effects it will have on the human body.