TP53 Sensor Can Stop Cancer In Its Earliest Stages

In an article published on ScienceDaily, it discusses a new mechanism that can help stop cancer in its early stages. In normal cells, there are oncogenes and tumor suppressor genes that make sure that nothing goes awry during cell division. Oncogenes signal the cell to multiply, and tumor suppressor genes, or TP53 genes, inhibit those signals from the oncogenes to tell the cell to stop. Cancer begins to take form when there are mutations in either of these genes, particularly in tumor suppressor genes. If there is a mutation in a tumor suppressor gene, oncogenes will activate the cell to uncontrollably multiply and signal will never be inhibited by the tumor suppressor gene.
Researchers came up with the idea of putting a sensor on the TP53 gene which essentially works like a smoke detector. When the sensor picks up abnormal activity (or lack of activity) coming from the TP53 gene, the sensor will cause the cell to initiate apoptosis, which essentially causes the cell to kill itself. I believe that this TP53 sensor is going to break grounds for cancer research because not only is it noninvasive, but it is going to be able to stop cancer in its tracks at its earliest stages. Also, it could prevent cancer from continuing to spread. 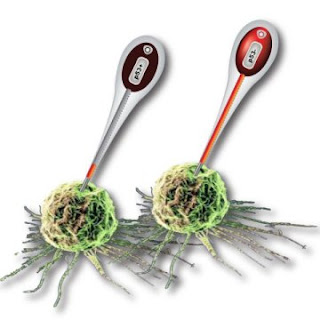