Rabies is a serious viral disease in animals that effects the central nervous system, ultimately leading to brain inflammation and death. This disease is most often transmitted through animal bites, scratches or salvia of infected animals. It causes serious public health risk in Latin America as it causes human death and the death of millions of dollars of livestock every year. The largest cause of rabies spread in Latin America is due to vampire bats and their blood-feeding diet. Although there are efforts to reduce vampire bat populations in epidemic areas, it has proved ineffective because the the death toll of humans and livestock is higher than before and the rabies virus is spreading to areas it was not before. Scientists have come up with the idea to use the genetic analysis of vampire bats in Peru to forecast the migration of the rabies disease. This research has led to the theory that the rabies virus will spread to the Pacific coast of Peru by the year 2020. Peru's Pacific coast is currently VBRV(Vampire Bat Rabies Virus)-free, however, evidence from testing the genomic sequences of vampire bats in VBRV-epidemic areas have given researchers insight on how the rabies virus is spreading and it suggests it is moving towards the coast. They analyzed 264 samples of rabies virus collected from livestock all over the country over fifteen years, and that it could be traced back to one of three common ancestors. The virus lineages were traced back the the east North Andes, east South Andes, and the inter-Andean valleys south of these areas. To collect data from the vampire bats, they used tissue samples from 468 vampire bats across Peru over five years and examined the mitochondrial DNA and the nuclear DNA. The data suggested that females did not move between different regions of Peru and that spatial distribution of the three location lineages was at fault of the male vampire bats. Based off of this information, scientists were able to create a map that forecasted future rabies invasions. To confirm their map's predictions, these scientists have been tracking livestock in their predicted areas and seen an increase in rabies spread toward the coast. Understanding how a disease spreads can allow us to prevent or control proliferation and prevent epidemics. 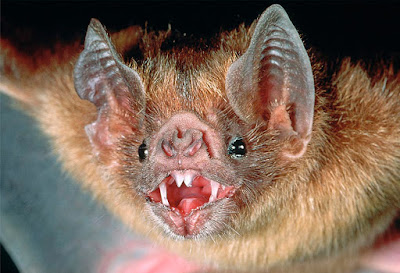 Rabies is most commonly associated with canines in the United States, or wildlife such as foxes, raccoons, and squirrels. However, in the United States the most common source of human rabies is from vampire bats as well. At every veterinary hospital, animal clinic, and wildlife rehabilitation clinic in the nation, it is required that every animal handled is up to date on it's rabies shot. Most jobs that require jobs handling wildlife, including my job with exotic birds and wildlife animal care center, require humans to receive a preliminary rabies vaccine before handling any animal that could possibly have rabies. It is the worst time anyone could have at the doctors to receive those shots. If an animal is suspected of having rabies, this is taken very seriously in the veterinary field. Since rabies is a disease that effects the central nervous system, and not blood or tissue or urine/feces, the way to test for an animal having rabies is extremely gruesome. The animal must be euthanized and the head must be decapitated and sent to a lab to test the brain tissue for rabies. This process may seem harsh, especially when it affects domesticated animals who bit someone and may not have rabies being euthanized and having their head removed to test, but it is the only accurate testing method for rabies. This is done so that the people who have come in contact with the rabid animal can receive medical treatment if the animal did in fact have rabies. This has happened at the practice I work for only a handful of times, and it never gets easier for anyone involved in the process. The spread of rabies in Peru being able to be tracked is one step closer in understanding the disease, and hopefully making strides toward it's containment.