Practically everyone today is well-informed in regards to the Zika epidemic that had originated from Africa. When the Zika virus finally spread to America, it has left more than 2,000 infants with brain damage. However, there is a virus that is far more dangerous than Zika, especially to pregnant women and their infants. Cytomegalovirus, or CMV, is the most common viral infection that is present in birth and the leading non-genetic cause of deafness in children. Annually 20,000-40,000 infants are born with CMV, with at least 20% of the infants developing permanent disabilities such as deafness, microcephaly, deficits and abnormalities in intellect and vision. However for such a dangerous disease, why is there no known vaccine for it? 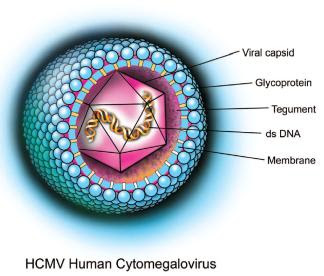 According to Dr. Mark R. Schleiss, the director of pediatric infectious diseases at the University of Minnesota Medical School, "Everyone and their brother knows about Zika, but it's very rare in the U.S." In fact, only 900 pregnant women in the US have contracted the Zika virus in comparison to CMV. He argues that CMV is just as dangerous as Zika and a vaccine should have been made a long ago. However, there isn't one due to the lack of public awareness about CMV. Less than half of gynecologists tell pregnant patients how to avoid CMV, yet in contrast, doctors have advised every precaution available for the Zika virus.

CMV is a member of the herpes family and is often transmitted by contact with saliva and urine, often between children and adult. According to the statistics for CMV, nearly 1 in 3 children are infected by age 5 and more than 50% of adults by age 40. Like Zika, it can remain in the body permanently and can cause mild flu-like symptoms but can be detrimental to pregnant women.

Luckily, it has been discovered that antiviral drugs can reduce the effects of CMV symptoms upon being detected early on. However, there is still no known cure for CMV. Experts however are pushing for routine screening of newborns for CMV and developing guidelines to advise pregnant woman in preventing CMV. Despite being lesser known than Zika, CMV still should not be taken lightly and more public awareness should be made in hopes of developing a vaccine for such a lethal viral infection in pregnant women and newborns.