The Genes Behind Why Dogs are Man's Best Friend

“Dogs are man’s best friend” is a very common quote used to describe the fondness and loyalty dogs have for humans. Surprisingly, research shows that the same genes linked to social disorders in humans, such as autism, are possibly the same genes behind dogs’ social behavior towards humans. 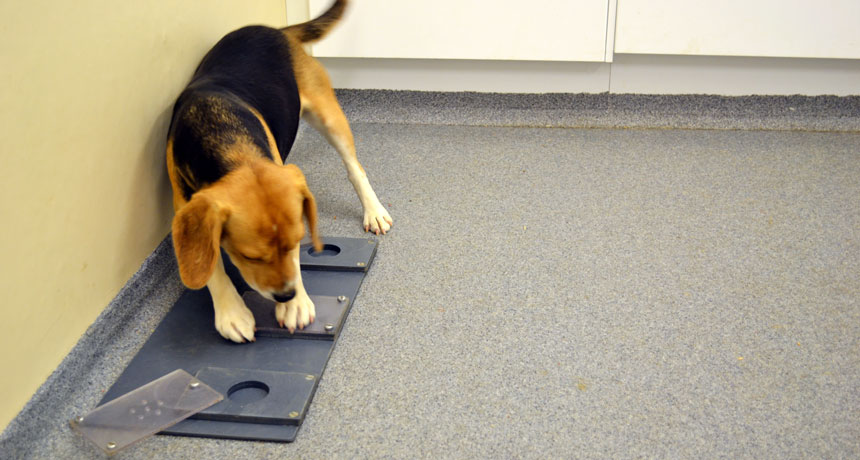 The behavioral experiment in which dogs’ sociability towards humans was tested.

A behavioral experiment was conducted using hundreds of lab-bred beagles, in which they were given a task to open three transparent lids containing treats, one of them being tightly closed. The dogs were observed to seek help from the person standing in the room after finding it hard to open that lid, instead of finding a way to open it on their own. Some of them looked at the observer and then back at the stuck lid, while others tried to make physical contact or stayed close to the observer. The Gender of the beagles was also shown to play a role, in which females were shown to be more sociable than males.

A DNA testing method, called Genome-Wide Associated Studies (GWAS), was used to study a large number of variants within each dog’s genome. Results showed that five genes selected during domestication were heavily linked to dogs’ sociability towards humans. Four of these genes, including the SEZ6L gene, have also been linked to human social disorders, such as autism, schizophrenia, aggression, and ADHD. The evidence however, is not enough to prove this correlation, since this test was only performed on beagles. Scientists plan to do further research on other dog breeds, and hope that this information would also be useful in gaining a better understanding of human social disorders.

I found this information very fascinating because I never knew that a gene that can possibly be beneficial in one species, can be harmful in another. I’m looking forward to reading more about this when further research and confirmation are made.


http://www.dailymail.co.uk/sciencetech/article-3813873/So-S-man-s-best-friend-Genes-linked-autism-humans-influence-dog-sociability.html
Posted by Unknown at 12:25 AM