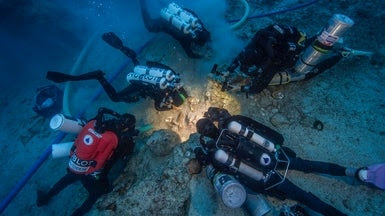 On August 31st, off the tiny Greek island of Antikythera, sponge divers found human remains from a 2,000 year old merchant shipwreck. This is the first ever shipwreck to be examined by archeologists. The first question that came to mind for the scientists was whether or not they were able to collect DNA from the recovered bones.  After closely examining the remains which consisted of pieces of  skull, teeth, femur, several arm bones, rib bones and petrous bone (dense bone behind the ear), scientists agreed that the bones were very well persevered. This is shocking yet amazing news since it has been over 2,000 years since they've been in the oceans waters! Before testing the remains for DNA, bone expert, Hannes Schroeder suspects the remains belong to a young male, in his early twenties based on the formation of the skull and teeth.

If Schroeder is able to recover the bones DNA and sequence it, this would mean breaking through to new grounds that have never been reached before. The only other ancient DNA identification scientists were able to recover was last year on a sample from a cold climate (northern Europe), which resulted in the discovery of the first Mediterranean ancient genome of a Neolithic (New Stone Age) individual from Spain.

One question that many researchers have been asking themselves is: Why have so many bones been found at this site compared to many other shipwrecks were hardly none are recovered?
Well, researchers have concluded that this shipwreck must have possessed two components that a majority of other shipwrecks did not.
1. The wreck must have happened fairly quickly, much faster than the time it takes for the passengers to react to it.
2. Many people must have been below deck at the time of the sinking.
For the time of the wreck, the vessel was extremely large, measuring up to forty meters long. The ship also had multiple decks with many passengers. Since the wreck happened close to shore, researchers think the boat crashed against the rocks and broke up the boat and started sinking, before the passengers on the lower deck realized and had time to evacuate.

More news will be released on this exciting discovery, as soon as the results from the DNA testing are confirmed. Then the next step will be to sequence the genes which will take several months. For now, that is all that has been reported.
The below link is a document on how scientists recover DNA from ancient remains!
http://www.nature.com/nprot/journal/v2/n7/full/nprot.2007.247.html