Genome of the largest bony fish is sequenced!

The world's largest bony fish known as Mola Mola, or the Ocean Sunfish, has had its genome sequenced for the first time to try and help to explain its fast growth rate and massive size. The Ocean Sunfish can reach lengths of nearly 3 meters and weigh up to 2.5 tons! These creatures have fast growth rates despite a relatively lacking diet of mostly jellyfish. Mola Mola develop at an incredible speed of gaining one kilogram per day, while other bony fish species grow at rates of about 0.02-0.5 kilograms per day. In addition to the rapid maturation, these fish have the ability to produce more eggs than any other known vertebrate animal. A single female can produce up to 300 million eggs at one time. The Ocean Sunfish has many unique qualities and even its body shape alone is intriguing. Its skeleton, unlike many other bony fish, is made up of mostly cartilage. These characteristics motivated scientists from the China National Gene bank at BGI-Shenzhen and A*STAR to investigate this fish's genome to help explain what causes these strange traits.

After sequencing the genome researchers discovered that the Mola Mola had numerous genes that are involved in growth hormone signaling that evolve especially fast compared to other fishes. This helps to shed light on their fast growth and enormous size. Scientists also looked at genes involving bone formation to sort out the cartilage abundant skeleton. They discovered changes in bone forming genes that code for cartilage instead. This study certainly has opened the door to other research questions on the world's largest bony fish. 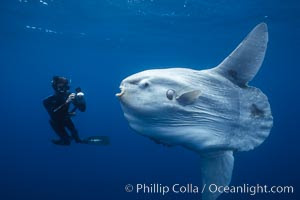