South Americans May Have Traveled to Polynesia 800 years ago 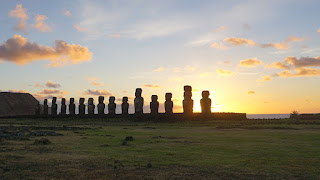 Researchers suggest genetic analyses show "....DNA swaps between the voyagers and people on a still-undetermined eastern Polynesian island were followed by the spread of the South American ancestry to other eastern  Polynesian islands" (Moreno-Estrada) It is suggested that many Homo groups lived during the Middle Pleistocene and were "...too closely..." related to have been distinct species. The groups would have eventually mated with each other. However it is not known when exactly during that era, the groups mated and there is no definite distinction (genetically nor phenotypically) in Homo sapiens, Denisovans and other ancient Homo populations. Scientist John Hawks from the the University of Wisconsin-Madison, shares new fossil evidence came from the region of Israel.  molar tooth from the lower jar of an individual found near the site called Neshar Ramla (~140 000 and 120 000 years ago) This suggests that a previously unknown Eurasian Homo population lived at the site.
To continue, "...back-and-forth..." migrations by Homo groups between Africa and Asia started ~400 000 years ago. Rains had turned parts of deserts into green passages covered, which were identified at a Saudi territory that once hosted hunter-gatherers, whose tools were left behind. Stone tools found at the site (~200 000 years ago) resembles like tools found in Africa (from the same H. sapiens)  To conclude, the route of the groups is shown and it is definitely a reason that migration has occurred. However, one should not assume this is could be the only reason. Further research must be conducted.
Posted by Mina Amani at 4:08 PM