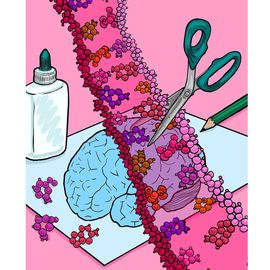 Researchers at Mount Sinai have determined new avenues for understanding molecular and cellular mechanisms of brain development and how they affect both disease and health by cataloging sites in the brain where RNA is modified. As an individual ages, the RNA editing rate in the brain increases. This modification happens throughout one's lifetime through a process known as adenosine-to-inosine (A-to-I) editing. With this they could explore the implications across a range of aging and neurodevelopmental disorders. Because there are so many already identified A-to-I sites, it can be difficult to determine which sites are physiologically important. The researchers were able to narrow it down to about 10,000 sites that have potential functional roles from early fetal development through advanced aging. These sites will help get a better understanding of brain neurodevelopment through a lens of A-to-I RNA modifications.

While DNA is widely known as the genetic blueprint of all human and other living things, RNA is responsible for carrying out the instructions to create functioning proteins. When modifications accumulate on RNA, it can alter the way a protein functions. These A-to-I changes are introduced by a group of ADAR enzymes whose edits have been known to have an important physiological role in early fetal development by regulating neuronal signaling and synaptic transmission. All of this shows that in the course of a lifetime, thousands of individual edits will accumulate in the RNA in the brain and will likely produce functional ramifications as a person ages.

The data collected by the Mount Sinai study was from more than 800 individuals covering all stages of pre and postnatal development. The broad data can create a timeline to depict how A-to-I editing changes over time. The work uncovered by the researchers can now provide many avenues for future studies and offer insight into the role of RNA editing in the promotion of health and disease.