Genomic Study of S. flava Leads to Insight on Evolution of Herbivorous Insects 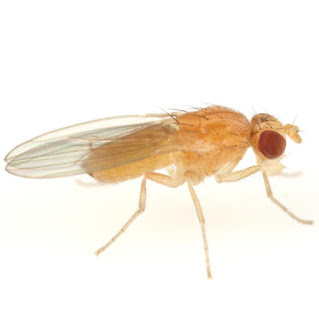 Herbivorous insects make up roughly 25% of all animals on Earth. In an effort to understand them better researchers did a study on Scaptomyza flava, a fruit fly species of the family Drosophilidae. They are leaf-eating insects which use their ovipositors, or egg laying organs with valves that open and shut like jaws and tough, tooth like, bristles to cut into and scoop out their food. It mimics a mouth. Some scientists hypothesized that the development of organs like the ovipositors were central to the evolution of herbivorous leaf-eatering flies, like S. flava. To figure this out researchers tried to learn how changes to the ovipositors corresponded to flies' feeding habits and diet. They found that bristle number increased with the emergence of plant eating millions of years ago. They also wanted to learn more about how insects started eating plants and this study was done by sequencing these flies' DNA. The team found candidate genes thought to be responsible for the development of these "toothy genitals", as the article calls them.

I was surprised to learn there is more than one species of fruit flies. There are other kinds of fruit flies other than the ones we work on in labs. I was also surprised how important a feature, this weird and small organ, is to these biologists. How important the study of the ovipositor is to better understanding herbivorous insects. I am glad that this DNA study was their first step towards understanding the "genetic basis of this trait," as well.

Posted by Miguel Barriera at 11:06 PM