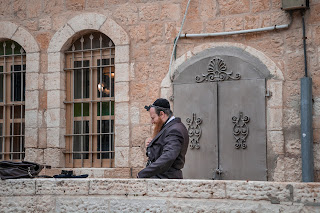 Photo by Maayan Nemanov on Unsplash
Excavation of an old storehouse in efforts to build access ramps led to unearthing a medieval Jewish gravesite in Erfurt, Germany. From there, archaeologists were able to collect bags full of molars, bicuspids, and incisors from the bones of the dead buried there. Geneticists extracted DNA samples from 33 teeth. Studies of their DNA reveal how, despite being genetically related to the medieval Ashkenazi individuals of the Erfurt community, modern day Ashkenazim, even if they live worlds apart, have less genetic variation. From this study, scientists, geneticists, and researchers discovered the high level of homozygosity among modern Ashkenazi Jews around the world. The evidence suggests this was due to a bottleneck (founder) event where the original community experienced a reduction in population size and repopulated from the few that were left among them.

It's inspiring to hear how DNA, whether it comes from a living person, or centuries old individual long buried, has a story, a history to share. The computational geneticist from Columbia University, Itsik Pe'er said it best, "Ancient DNA sequencing is a cheat-code that can take you to places where you don't have information today."

Posted by Miguel Barriera at 8:16 PM