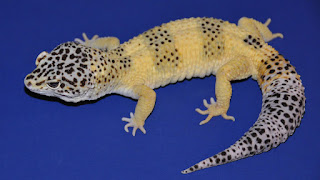 Geckos used in the study are a type of leopard geckos called Lemon Frost (Eublepharis macularius), which have white skin that highlights the reptiles' yellow colorings and tends to develop tumors. Researchers from UCLA suggest these Lemon frost traits are present due to a single gene, which has been also implicated in the skin cancer melanoma in people. Mr. Frosty, the Lemon Frost reptile was bred with various female leopard geckos to establish a colony of over 900 lizards. Dr. Steve Sykes and his team of researchers concluded more than 80% of Lemon frost geckos had developed tumors, which were made of white skin cells before the reptiles were 5 years old. The scientists collected DNA from lizards' saliva. 30 geckos that inherited the Lemon Frost traits from both parents, over 100 lizards that inherited traits from one parent, and 40 non-Lemon Frost geckos. next, the genetic material of the reptiles was studied and compared, which enabled scientists to trace the Lemon Frost tumors and coloring to a mutation in a gene called SPINT1.  This gene has been linked to cancer in humans. It has also been linked to tumor formation in fish and mice.

To finalize, I do not think geckos are the best example of model organism, given their life span is up to 15 years, however, I understand the purpose of using geckos specifically in this case. Also, the study suggests geckos could also be studied further to examine SPINT1. In my opinion, the scientists' conclusion that the mutation on gene SPINT1 is "the cause" for the tumor growth is not 100% correct. There are many other factors that must be considered when deducing what causes skin cancer, such as environmental settings etc.