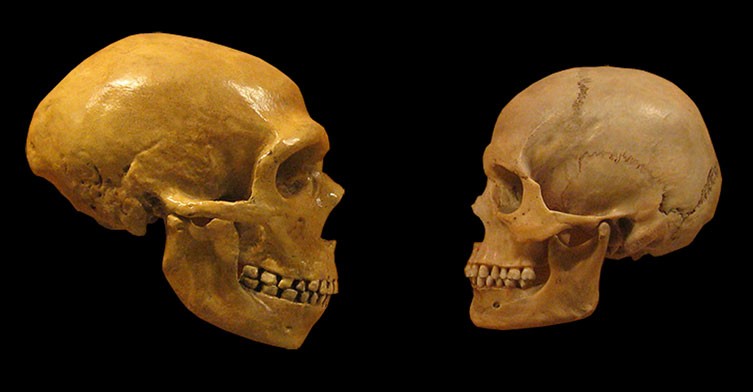 A group of molecular biologists and geneticists in Germany had an interesting breakthrough when studying differences between the brains of Homo sapiens and Neanderthals.  Although scientists have known for a while how the brain sizes of these two hominin species compared, there was not much evidence about the structure or neurology of the brain. Now, however, these German scientist have identified a key genetic mutation between the two. Modern humans have a mutated version of the TKTL1 gene found in Neanderthals and it appears to allow for a more efficient creation of neurons in the brain. A great number of neurons could have contributed to an increase in neuroactivity/intelligence and therefore Homo sapiens' evolutionary success as opposed to Neanderthal's extinction. That would be incredibly significant for a mutation that is only different by one amino acid.

Other scientists are a little more hesitant to accept this proposal. The article discusses how this researched focused on only one cell line and that they largely ignored data that was not Western European. These critics are not turning down the proposal altogether. They are simply calling for wider and more extensive studies that could contribute to this finding.

Personally I think the concept of this research is very fascinating. One of those big life questions that I have is why out of all the early hominin species, we were the only ones to make it this far. This article exposed me to a potential contributing factor and gave me hope that more could come soon. Overall, I think the article was well written. I do wish, however, they had talked more about how the German scientists accessed the Neanderthal DNA to compared it to modern humans.

Posted by Alyssa Vitiello at 1:38 PM