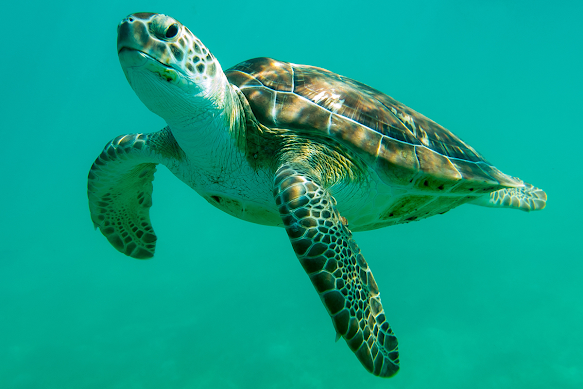 According to an article published in University of Central Florida Today, a group of UCF researchers discovered new gene variants in the immune systems of sea turtles, which could be the key to saving this species from another major disease: fibropapillomatosis (FP). This study was published in the journal Royal Society Open Science and sheds a light on the role of gene variants (MHC class I alleles) in protecting sea turtles from this disease.

This is the first time researchers have studied variation in MHC genes in green sea turtles. MHC proteins help recognize pathogenic threats and then key the immune system to respond to them. FP causes sea turtles to develop tumors on their bodies, which inhibits their mobility and ability to catch prey.

About half of the green sea turtles observed in the Indian River Lagoon have FP. Central Florida’s Atlantic coastline hosts about one-third of all green sea turtle nests in the state. Green sea turtles are important because they contribute to healthy oceans by grazing and maintaining seagrass beds. All turtles are considered threatened or endangered due to threats from pollution, coastal development, and fishing, in addition to infectious diseases.

A better understanding of the role genes play in protecting sea turtles can help inform management strategies, such as captive breeding using turtles who are genetically resistant to FP, as stated by UCF Associate Professor of Biology Anna Savage. Simply knowing a baseline of how much variation is out there can help give researchers a better idea of what sea turtle populations will look like in the future. Knowing the relationships between genetic variants and disease susceptibility can be used as a tool if one knows which of the MHC alleles is really important for surviving disease threats.

The lead author of the study, Katherine Martin, helped sequence MHC class I genes from 268 green sea turtles and 88 loggerhead sea turtles. The researchers found 116 newly-discovered alleles, some of which were linked to the development of FP but also potentially the regression of tumors. Even with all of these alleles discovered, however, there needs to be more sampling to get a better picture of what MHC alleles do to protect sea turtles. The next step of the experiment is to expand the sampling of green sea turtles and loggerheads as well as examine genetic information from other turtle species.

Posted by Emily Zembricki at 11:53 PM