Gene-Edited Beef Cattle Get Regulatory Clearance in US 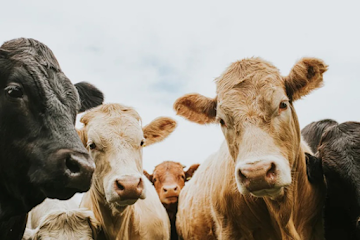 Beef from genetically modified cattle is coming to a supermarket near you! U.S. regulators gave the all clear for the sale of beef from gene-edited cattle in coming years after the Food and Drug Administration (FDA) concluded the animals do not raise any safety concerns. This marks the third genetically altered animal for human consumption in the US after salmon and pigs. Recombinetics, the company in charge of this project, has used technology called CRISPR in order to alter cows to have short, slick coats that let them more easily withstand hot weather. This results in the cows packing more weight in an easier manner leading to more overall meat production. This is similar to the difference in chicken size today vs in the 1950s.

“Unlike the salmon and pigs, the cattle did not have to go through a years long approval process. The FDA said the cattle were exempt from that because their genetic makeup is similar to other existing cattle and the trait can be found naturally in some breeds” (Choi, 2022). This edited trait is able to be passed down through reproductive measures and requires no additional interference on behalf of the scientists.

While I do not agree with the science being conducted in this piece, I certainly found it quite interesting how fast the FDA approved its decision. Maybe it is an industry thing with money at its center, but I believe that not many people will be on board with eating these “new” cattle. At this point in time there are many more questions than answers and we can only wait and see how the success of this genetic achievement plays out.

A similar article regarding genetically modified animals can be found here.
Posted by Amarilis Martinez at 10:17 AM