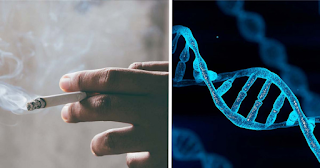 This article discusses why most people who smoke regularly won’t develop lung cancer. A small study published Monday by Nature Genetics reported that smoking drives an increase in the number of cancer-causing mutations in lung cells, but only up to a certain point. According to Simon Spivack, co-author of the study, their data suggests that these individuals who were heavy smokers have managed to survive so long because they managed to suppress further mutation accumulation. This could be due to the individual having a proficient system that detoxifies cigarette smoke and repairs DNA damage.

Countless studies have made it clear that smoking can severely affect the body, and that they contain a plethora of harmful chemicals and carcinogens. About five years ago, researchers at the Albert Einstein College of Medicine in New York figured out a way to determine the exact order of A,T,C, and G of the DNA cell. They used this technique to compare the lung cells of people who have never smoked before and people who have been smoking for years. It allowed them to determine the number of mutations in their cells. The study involved 33 participants, their ages ranging from 11 to 86. Half were smokers, and the other half have never smoked in their lives. They are measured by pack years. One pack per day for each year represented a pack year.

The researchers found that the heavier the smoker, the more mutations were found in the DNA of the lung cells. However, after about 23 pack years, the number of mutations disappeared. It stopped increasing due to their ability to suppress mutation accumulation. I found this interesting, because I wouldn’t have guessed that there was a genetic reason why smokers won’t develop lung cancer. The likelihood of smokers is still increased in comparison to non-smokers, but it’s interesting to know that based on a new technique, it can be proven that these mutations level off. Here is a similar article.