DNA offers a new look at how Polynesia was settled 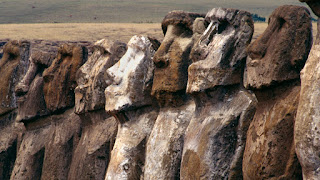 Polynesia, a chain of thousands of islands in the pacific left a genetic trail on the route the voyagers had gone. Using present-day Polynesian DNA, indicates the travelers had started in Samoa in the west, then heading south and then to the east.Traveling east around the 1300s, a small chain of islands were settled upon, one of them being Easter Island. This new analysis, showing the settlement dates ranging from the year 800 to the 1300s aligns with archaeological dating of the years 900 to 1250. However, because of the genetic trail, the new data allows for the visualizing of the pathways the settlers had taken. With the new investigation, researchers had identified DNA exclusive of Polynesian origin from 21 different islands.Using the rare variants displayed in the individuals, researchers can construct the pathways settlers had traveled between each island.

Posted by Matthew Bloodgood at 1:27 PM