Some viruses thwart bacterial defenses with a unique genetic alphabet 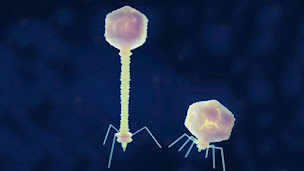 Over 40 years ago, a Russian scientist reported a bacteriophage called Cyanophage S-2L replaces adenine, also known as A with 2-aminoadenine which its letter designation is Z. It was unknown why this bacteria-killing virus changed from A to the Z. After many years, two groups of scientists discovered the reason why viruses incorporate Z into their DNA and how they do it. In the genome of the virus, genetic code for an enzyme for building Z was discovered named PurZ. However, Cyanophage S-2L was not picky about using A or Z, another enzyme named DatZ was the cause of the use of Z as it would degrade the adenine building blocks leaving the only alternative of using Z. Another viral enzyme in Siphoviridae bacteriophages contained an enzyme called DpoZ, a polymerase that was preferential to using Z instead of A. As of now, it is only speculated on why the phages produce Z. It is believed it is to combat against bacterial defenses, making it more difficult for bacterial enzymes to identify the foreign DNA.

Posted by Matthew Bloodgood at 1:48 PM