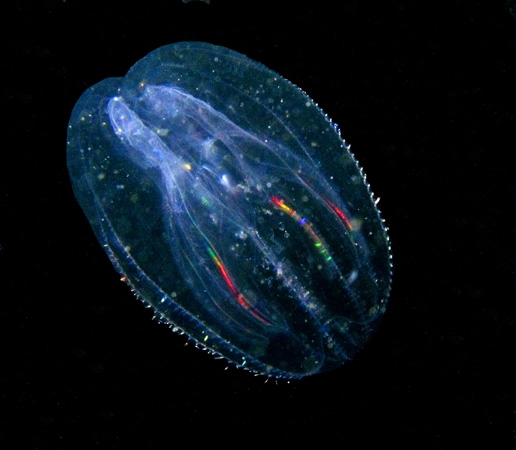 \
This article deals with how many biologists and scientists debate whether organisms like the ctenophore or the sponge came first. Recently a chromosome-level ctenophore genome shows that comparing whole chromosomes can "resolve the phylogenetic position of ctenophores and sponges". The fact that sponges do not really have true tissues, organs, or symmetry makes it believable that they were more ancient, but many researchers have claimed that their genomic research on ctenophores proves otherwise.
Chromosomal level evidence of ctenophores is now being examined by culturing the California Sea Gooseberry in order to produce the first karyotype  for them. It was found that they have 13 pairs of chromosomes. The researchers then used Hi-C chromatin conformation capture to visualize the chromosomes microscopically. In the genome they found thousands of nested intronic genes, many of which were doubled nested. Since this is found in plants, animals, and even humans, it suggests that the genes found in these organisms may have evolved over time. While this research did not focus on the comparison between sponges and ctenophores specifically, it shows that the methods needed to uncover that debate can be performed.
Posted by Tarun Harshe at 11:04 PM