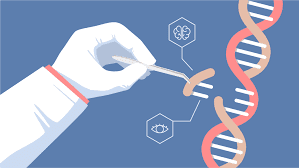 Researchers at the New York Genome Center were able to create chemically modified guide RNA's From the CRISPR family that can help alter RNA in human cells. CRISPR stands for "clustered, regularly interspaced short palindromic repeats", are a family of DNA repeats found in the prokaryotic genome. The process used at the New York Genome Center consisted of genetically modifying guide RNA's from the CRISPR family and making them specifically target cell surface receptors in human T-cells. Their particular experiment contained modified guide RNA's from the SARS-COV2 virus, these guides were called CRISPR Cas-13. Scientists and drug developers claim that this technique enhances the ability to trace, edit, and remove RNA in human cells. There is current experimentation with this technique that is attempting at lessening the effects of Covid on those who become infected. To do this scientists are trying to knockdown the universal RNA leader sequence of Covid-19. This leader sequence is released within the body and is responsible for replicating and infecting other cells inside the body. This new technique of RNA modification may be able to remove the ability of the RNA leader sequence from replicating within our bodies without modifying the underlying human DNA genome.
The ability of this advanced RNA modification to not alter the underlying human DNA has large potential within the medical field as there will be less negative side effects to patients who undergo this treatment. Once this technique is perfected, new viruses may be able to be cured and contained within a matter of weeks. Scientists have many different CRISPR sequences to experiment with. Using CRISPR DNA to alter human RNA has already proven to be a huge advancement in virus and disease control with many future possibilities.
Article Link: https://www.sciencedaily.com/releases/2021/08/210802140153.htm
Related Link: https://www.livescience.com/58790-crispr-explained.html
Posted by Austen Sanchez at 9:09 PM