Gamma-delta T Cells and it's Relationship With the Gut 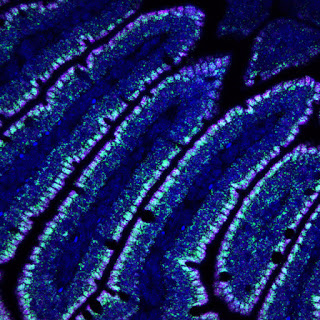 In the article “Mysterious Immune Cells Change the Gut Lining to Accommodate Diet” scientists observe the mechanism in which epithelial cells keep pathogens out as it absorbs nutrients and minerals from the food we eat. Based on a study conducted with mice researchers saw that immune cells called gamma-delta T cells are responsible for epithelial cells of the gut being able to maximally absorb nutrients. Research has shown that animals have genetically adapted their intestines to their specialized diets; pandas, koalas and other animals.

A study conducted on mice, consisted of having changed the normal diet to two specialized both with the same calorie intake but one was higher in protein while the other had a higher carbohydrate intake. The results of this study indicated that mice had a higher adaptability of absorbing the carbohydrate diet. Upon inspecting even further into the genetic changes that occur in the single cell RNA had indicated that the gut selectively expands. The study was conducted again without micro bacteria present in the gut and the same result occurs which further establishes that the accommodation which the gut undergoes is independent to whether or not bacteria is present. However when the experiment was repeated once again limiting the amount of lymphocytes present in the gut, gamma-delta T cells had indicated that they were responsible for the expansion and contraction of the gut and the potential of the absorption of nutrients.

Gamma-delta T cells besides being the causes of mucus blocking the airways when contracting the flu, it may also be responsible for regulating tissue homeostasis. Not only is the immune cell versatile but it contributes to the guts ability to accommodate diets to extract the most nutrients from foods. Studies like these are important to make note of because many of the components of the body are still very much not understood when it comes to their functions and relations with other functioning systems to keep the body working.

Posted by Ashley Villavicencuo at 10:35 PM