The study of human heredity got its start in insane asylums 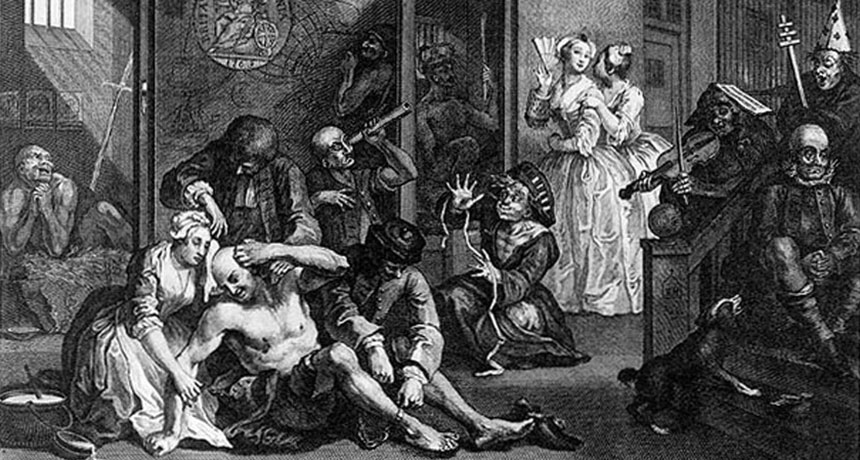 
King George III's descent into madness sparked efforts to untangle the inheritance of mental illness by analyzing patient records at insane asylums as depicted in the above photo representing London's Bethiem Hospital in 1735.
The study of heredity emerged as an international endevour to mine data for associations to explain mental illness. It started with good intentions. Many asylum founders of the late 18th and early 19th centuries hoped to cure people of mental illness through a humane, psychosocial "moral therapy". At first, asylums claimed absurdly high 'cure' rates. Reports of 50% were routine. However by the mid-nineteenth century, asylum directors realized that they could simply say that although a cure seems distant, statistical patterns discovered in ever-larger study populations will one day reveal a cause, and a cure will follow. People bought it and asylum science grew. Eventually, having eliminating previous known causes for mental illness, scientist fixed on the patients' pedigrees. They promised to find more data and genes for diseases. After the 1927 Supreme Court decision Buck v. bell, the US programs forced sterilization on tens of thousands of people deemed mentally deficient. They launched their wider programs by gathering more than 10,000 people from asylums all over southern Germany.


This was a very interesting article to have read. These connections made so early on in history paved the way for future research. These connections are roots to today's genomics industry the tree. In the article it states that some will reject this idea, however the author of this article suspects that there is well-documented evidence to prove this making it difficult to dismiss.