The Debate of Testing Newborns for Adult Onset Diseases

The rise of genome sequencing has allowed for risk analysis of development of certain diseases.  There are now debates going on about whether or not parents of a child should be able to sequence their child's genome for diseases that occur in adulthood. Lainie Ross, a Chicago Medical ethicist, argues against testing for adult diseases stating that creating “patients in waiting” is unethical as they may not have to be concerned about the condition for decades.
One example of a case involving this issue occurred during the BabySeq Project which sought to screen newborn genomes for childhood onset diseases. However, in one individual a BRCA2 mutation was discovered which is tied to an increased risk of breast cancer. Due to the fact that this is an adult onset condition, they had to ask the review board for permission to tell the parents arguing that the information could be beneficial to the child by showing there is a mutation visible in the family line which could cause the parents to get tested. Therefore, if the parents are positive for the mutation this information could have the potential to keep the child's parent alive. However, this argument does not keep the child's best interests in mind and rather uses the infant genome as a way to get information for the parents. Therefore, the question becomes one of the parents right to know their child's genomic data. Now, patients can opt out of the sequencing, and when it is done there is usually no testing for adult onset disease. 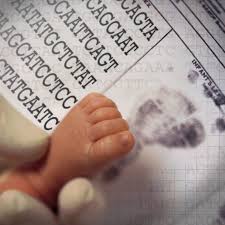 This debate is relevant to genetics because it is an example of the limitations that ethics put on science. Even though we have the technology to sequence children for adult onset diseases it does not mean that we should do so. I agree with this in the sense that it could cause unneeded anxiety for years before the first symptoms even occur. However, I could also see the possible usefulness in knowing about a disease that early in development.
http://news.uchicago.edu/story/should-newborns-get-genetic-testing-adult-onset-conditions
https://www.genomes2people.org/research/babyseq/
Posted by Jessica Lago at 11:09 PM