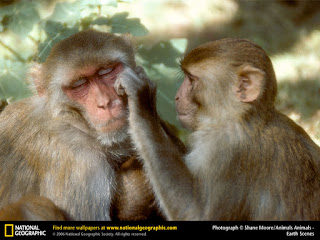 Scientists have long known there is a correlation between environmental factors- such as chronic stress- and the physical health of an individual. In fact,It is believed that this can actually cause a "pro-inflammatory" response. This shows that chronic stress can cause cellular/biological changes in an organism. The question the researchers at Yerke National Primate Research Center set out to answer was how long these effects can last.

An experiment was conducted using Rhesus monkeys. The monkeys were put into groups of five with one monkey introduced at a time. This created a strict social order among the monkeys, with the monkeys who were in the group longest holding the highest social position. The monkeys in high social positions would pick and bully those of lower social statuses. After a year, the monkeys were then switched into different groups and reintroduced in a new order, thus changing the social standings of the monkeys. Some monkeys who had previously held high statuses fell lower on the totem pole, others were higher, and some stayed the same.

Three blood samples were then taken from each the monkeys. The first group was simply incubated as a control, one was treated to mimic a bacterial infection, and one was treated to mimic a viral infection. The data showed that monkeys who had been in a high social standing in both groups had a better immune responses than those who had started at a lower social standing and ended at higher one. RNA sequencing of these samples also revealed that thousands of genes within these monkeys were expressed differently depending on their social ranks.

This study shows how social pressure and the concept of "biological embedding" can have drastic effects on individuals and the expression of their genes, even beyond childhood. This is fascinating to consider, especially when trying to find more links between genetics and psychology, particularly how individuals who have been exposed to psychologically traumatic evens may be more likely to have altered gene expression resulting in a decline in health.