Relatively recently, the entire panda genome has been sequenced with blood samples collected from a 3 year-old panda named Jingjing. Scientists used a technique called parallel sequencing, first creating short reads on the panda's DNA and then using the smaller pieces to connect and construct the entire panda genome. Information from the panda's genome will help scientists understand the panda's unique biological and behavioral traits. Such traits include their restrictive diet of only bamboo and their low fecundity rate, or their ability to produce few offspring. An understanding of the panda genome may also help aid with extended conservation efforts.

The panda genome is smaller than that of humans, with humans having about 3 billion base pairs and the panda 2.4 billion base pairs. Although there is a difference in the number of base pairs, pandas have about 21,000 genes coding for proteins which is similar to that of humans. Observation of the panda genome also revealed a high rate of heterozygosity, suggesting that inbreeding is not a cause for declines in population. Although inbreeding is not an issue for pandas, other studies have revealed that the genetic makeup changes less from generation to generation leading to a slower rate of evolution. 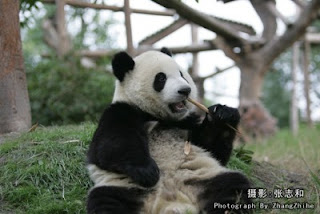 Sequencing of the panda genome has revealed an important discovery which could explain why the panda has such a restrictive diet. Pandas have mutations in two copies of a taste gene called T1R1. This particular gene encodes for the savory tastes of high-protein foods, including meat. Scientists believe that the panda cannot taste meat, so they turned to bamboo as their only food source. Pandas do have the genes to digest and extract nutrients for meat, but not bamboo. Therefore, the species rely heavily on the symbiotic relationship with microbes to extract nutrients from the bamboo plant.


I find it interesting that only few mammalian species have their entire genome sequenced, but not surprising as it is very costly and time-consuming. However, I do believe sequencing genomes is important when considering comparative genetics since they help determine the fundamental basis of biological functions. I hope the technique used in this study, parallel sequencing, will help sequence more mammalian genomes in the future and further our understanding of the similarity and differences between species on Earth as well as explain the behavior of certain species.