The article, “Knockout mice are guide to new genes for eye and skin disorders”, discusses the role mice play in discoveries about humans concerning certain disorders. There is a lot of information known about albinism. Albinism is a disorder that affects the pigment of hair, skin, and eyes. It can vary from extreme to mild. Scientists have been able to connect a lot of genes to 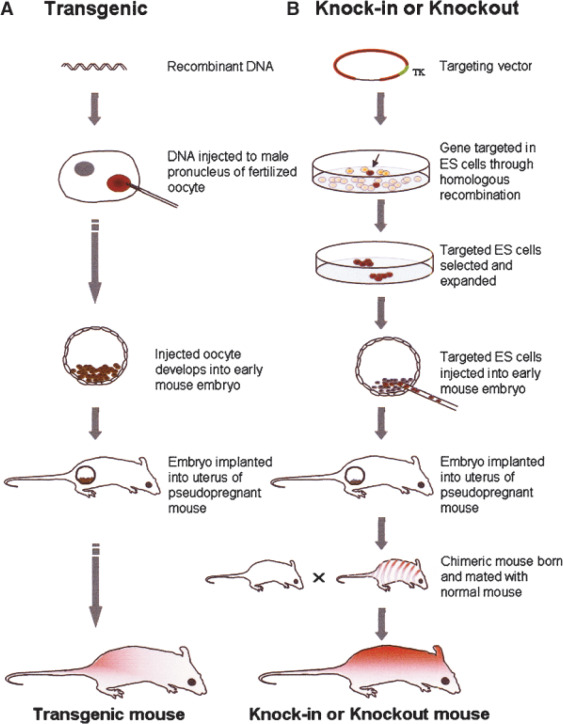 Above is an image that depicts the difference between a transgenic mouse and a knock-out mouse (https://www.jidsponline.org/article/S0022-202X(15)52560-8/fulltext)

the disorder, however there is still a lot unknown. At UC Davis, researchers have used mice to target certain disorders genetically. They use “knock-out mice” in which an existing gene is inactivated to learn more about its function.
Albinism in humans is just starting to be understood. However, it is very hard to look at the genetics of humans. We can easily sequence a genome, but it is harder to figure out the tie between a gene and a disorder. Luckily, through the mice, we are able to do this much more easily. Mice are not as variable, so it is easier to find the connections. While humans are not mice, through the discoveries in mice, it makes it considerably easier to find the target genes in humans. It allows us to focus on more specific genes which is a lot less daunting than the whole genome.
There has been success in using these knock-out mice. The article, “300 blind mice uncover genetic causes of eye disease”, explains how genes linked to vision disorders have been identified. Three quarters of these had been previously unknown. Through finding the analogous genes in humans, we will be able to locate the cause for blindness genetically with much more ease.
The reason mice are a prime candidate for the study as well as many other studies is because their genetic background has become so consistent in a laboratory setting. This creates a pretty reliable control and leaves less room for variables and discrepancy.


Once these genes for disorders are pinpointed in mice, the knowledge can be applied to humans. I think it is amazing how all living organisms, that we know of, are based on the same genetic code. Through this, it allows us to make discoveries into our own species through research on the genetics of another. Having more insight into these hair, eye, and skin disorders will have all sorts of positive consequences. Scientists will be able to understand certain ailments and be better equipped to treat them.