Imagine what it would be like to live in a world where there is not enough food produced in ratio to humans on the planet. In this video, scientists have predicted that by the year 2050 we will need 70% more food. Stephen Long emphasizes the importance of producing a higher crop yield now while we have fairly enough crops rather than in a few decades when crops are low in production.

Researchers are genetically modifying tobacco plants to increase growth by 40%. Occasionally in photorespiration, the enzyme Rubisco takes in an oxygen molecule instead of a carbon dioxide and makes a toxic compound called glycolate. Glycolate adds additional time to the process of photorespiration which affects the production of plants. Researchers have developed a more direct chemical pathway for photorespiration and genetically engineered cells to not produce a chemical that allows glycolate to travel its normal route.  Under real farming conditions, researchers tested their tweaked tobacco plants and found them to produce 41% more biomass.

Discovering a more direct chemical pathway in order to increase production in tobacco allows scientists to try the same modification in other plants such as wheat, rice, and soybeans. It's important to grow plants as effectively as we can because it will prevent and eliminate any concerns for food shortages in the present and future.

When I imagine living in a world where there is not enough food produced I feel fearful and worrisome. I feel farmers are often under-appreciated and taken for granted because people don't take time to think where their food came from and do not value the food that they have. To boost plant growth in the present can reduce any fears of what the future may be like in terms of food accessibility. I also believe that boosting plant growth now can begin to end world hunger and hopefully prevent it from occurring again. 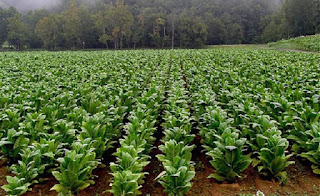