Genes Could Record Forensic Clues to Time of Death

Characterizing DNA for criminal investigation "is an extension from the typing of the proteins that are coded for by DNA to the typing of DNA itself". Genetic variations of the proteins include blood, tissue, and serum types, and because of the great development in molecular genetics, it is possible to study the differences of DNA in different people.

More recently, scientists have examined RNA instead of DNA and found that RNA is more stable than previously thought. Even after death, some genes can continue to transcribe into RNA. Typically body temperature and physical signs are used to determine the time of death, but medical examiners are beginning to use "changes in the microbial community during decomposition". 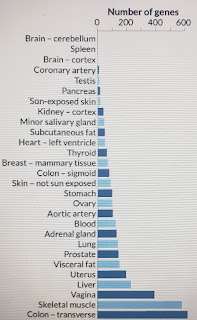 Above is a graph that shows different tissue genes with detectable changes after death. The brain displays zero change while other tissue types display various levels of change. This is evidence that the brain is not needed for gene expression and that molecular processes can continue until the needed enzymes are depleted.

This article sparked my interest because it shows how complex DNA is. As I read the article, it first reminded me of cockroaches and how they can live up to a week without their head. Genes may not last a week after death, but certain genes can continue transcribing after death. It also interested me because knowing the time of death is important for identifying the cause of death as well as confirming or disproving a crime. By examining the DNA forensic investigators can determine a more accurate time of death rather than an estimate.