The Bigger the Nostril, the Hotter the Air


It has been found through a study by a team of scientists from Pennsylvania State University that the shape of one’s nostril may share a relationship with the climate of the region that that person’s ancestors descended from. While noses are used for smelling, they are also used to warm and humidify the air that we breathe. It had been found that the more narrow the nostril, the more efficient the nose would be at warming and humidifying the air. Thus, people that descend from colder climates have more narrow nostrils, as they need noses that are more efficient at warming the cold air, and people that descend from warmer climates have wider nostrils, as they do not need noses that are as efficient at warming the already-warm air. It is stated, however, that the climates of past ancestors’ regions are not deciding factors on nose width; other genes may come into play that affect the shape of one’s nose. 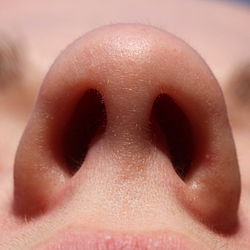 I love studies that center around the morphology of humans, so of course I was very interested reading this article. Reading articles that center around humans evolving to have advantageous traits is so interesting to me because I love to think that there are some humans out there that for some reason have higher-functioning noses than I do. It intrigues me that a larger-nostriled friend might have an easier time breathing in the Canadian wilderness than I would, simply because of the morphology of their nose. The study does make sense, anyhow, that humans in colder regions would evolve to breathe easier, and humans in warmer climates would evolve as to not have noses that are too efficient at heating already-warm air. It makes sense that someone like myself, who descends from a tropical country like the Philippines, has such large nostrils.

Posted by Minna Soriano at 1:05 AM