In an article published by Science Daily, it introduces how scientists from Rutgers University and Montclair state teamed together and looked at pollen gene mutations in corn. At first, it states how the U.S is the worlds largest corn producer with 90 million acres in fiscal according to the U.S Department of Agriculture. Then it states that the Rutgers-led team that mutations in pollen are caused by mobile retrotransposons which are comparable to retroviruses in mammals. A scientist from Waksmin Institute of Microbiology states his findings saying, "we found that spontaneous mutations in corn genes arise relatively frequently in the pollen of some but not all lines," (Dooner) 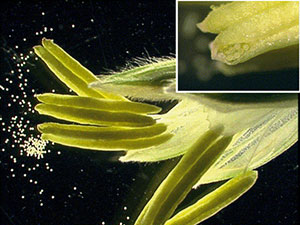 Pollen grains are the male gametes (reproductive cells) and have an estimate of several mutations per gene per million pollen grains according to the study in the journal Proceedings of the National Academy of Sciences. However the female gametes on corn ears had no detachable mutations The next step in this study is to monitor whether retrotransposon-induced mutations cause genetic instability in corn lines that have been previously reported by breeders. This study may lead to more successful breeding of corn and other crop.