Paleontologists from University of Otago have discovered an unknown genus of baleen whale, leading to a rewritten history of New Zealands ancient whales. In the article published from Science Daily  it talks about how the former PhD student Cheng-Hsui Tsai and his supervisor Professor Ewan Fordyce named the new genus Toipahautea Waitaki, with its fossils tracking back to the age of dinosaurs dating back to 27.5 million years ago. 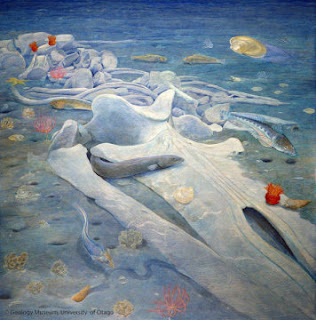 This whale was discovered based off a skull and other bones found off a fossil-bearing rock unit in South Canterbury and Waitaki district from the Oligocene period in Kokoamu Greensland . This time period was when New Zealand was an archipelago surrounded by seas. Even though the skeleton was disarticulated, the bones were closely associated with the baleen Mysticeti whales. It was concluded that this whales jaws were toothless, suggesting that it feeds like modern day minke whales This work along with further lab work was funded by the National Geographic Society.