Discover Magazine posted an article about a woman who has a nose that is able to sniff out Parkinson's. She claims to be a "super smeller" and states she had smelled that her husband had Parkinson's years before he was diagnosed. To diagnose Parkinson's is not easy, it can take years after physical symptoms arise. There is a test that is multiple images of brain to check and see if the cells are damaged. This testing is hard to do and usually is done too late. The woman who is able to smell the Parkinson's says she it is something very musky. Scientists believe that the smell comes from the sebum found on your face and back not something that is smelled by sweating. The woman's ability to smell the disease is a way to potentially find a cure or treatment for Parkinson's.

Although, the science behind this research is based on a woman's nose, she was born with a mutated gene related to odorant receptors to be able to be a super smeller. This could be a break through for all of the other people who are super smellers, they could potentially lead to finding a cure or treatment for Parkinson's since the smell can be caught as soon as it is brought on. I think many people would be skeptical but if they can truly smell it, then it does not hurt to have the chance to know if you are effected years before other testing could find out. 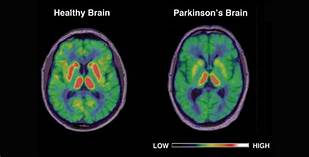