DNA gets a new and bigger genetic alphabet

A recent article published in the New York Times talks about how the genetic alphabet is getting a little bigger and it could give us clues to how life in other parts in the universe could exist. For the past 34 years Dr. Steven A. Benner has been trying to expand the alphabet of DNA. Last month Dr. Benner and a group of scientist published a paper reporting their success. The team of scientists not only expanded the DNA alphabet, they doubled it. Successfully building an 8 base DNA as a posed to the regular four base DNA. The 8 base DNA that consists of four natural and four unnatural bases and crafting it was a marvelous feat. As they fit perfectly into the DNA’s double helix and the enzymes can read them just as easily as natural bases. They named their new system Hachimoji (hachi meaning eight in Japanese and moji meaning letter.) Dr. Benner has started making unnatural proteins from these unnatural genes and has started a company Synthorx to develop some of these proteins as cancer drugs. On the other side of the spectrum scientists are heralding his work as making huge strides in the computer science field as well. The Hachimoji DNA with its 8 bases is capable of holding much more information. One day rather than having information embedded in silicon chips, it may just be encoded into a single strand of DNA. 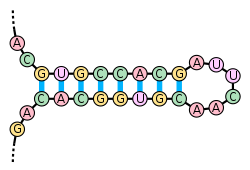 Posted by Daniela Perez at 9:37 PM