Advancement of Precision Medicine Through the Study of SNPs 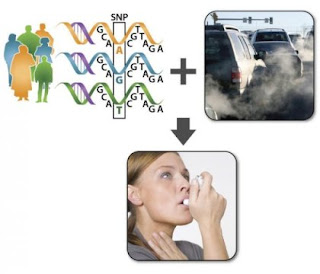 Researchers from the National Institute of Environmental Health Sciences (NIEHS) led by Shephard Schulman, M.D., and Stravros Garantziotis, M.D., conducted a study that examined genetic variation in the asthmatic population, and how these variations effect each individual's response to the environment, specifically, air pollution. For their study, Schulman and Stravros were able to gather 2,704 volunteers, who had varying degrees of asthma, through a DNA bank. Schulman explained that these degrees exist, because of a specific type of genetic variation termed single nucleotide polymorphism or SNP, which he states, "can alter the way proteins are made and make individuals more or less prone to illness" (1).

The two lead researchers isolated four SNPs of interest, and set their study by dividing the participants into three groups according to the SNP data: those who were highly sensitive to air pollution, those who were insensitive, and those in between. With the subcategories of genetic variation in place, the research team used participants' addresses and their distance from a major highway to determine air pollution effect, since air pollution is generally higher in places located near these highways.

As a result of the study, the researchers found that those who had the SNP that dictated hyper-sensivity and lived near a major highway had severe symptoms related to asthma, while those who were insensitive and did not live near a major highway showed less severe symptoms. With the conclusion of this study, the researchers hope to advance the field of precision medicine. Precision medicine focuses on preventative treatment specific to an individual.

For me, this study sheds light on how vital genetics can be on disease prevention. If an individual is known to have a genetic variation that leaves them prone to certain illnesses aggravated by the environment, a systematic approach can be taken in finding a specific treatment to aid the individual. Instead of spending money on costly prescriptions, a better approach may be to tailor/adjust that person's lifestyle to the environment they live in. In the case of those who are hyper sensitive and live near major highways, installing an air filter may be the first step in the right direction.