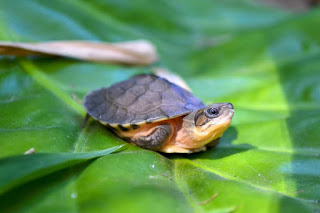 It has been suggested that warmer nests turn turtles into females rather than sex chromosomes. A temperature-responsive gene has been found which sets turtle embryos to be either male or female. Since the 1960's it has been in question how temperature can switch sex for turtles and other reptiles. Previous studies showed genes behaving different in opposite sexes but nobody understood exactly which gene controlled sex. A group of Chinese researchers Led by Chutian Ge developed a way to lessen the activity of certain genes by injecting viruses of artificial RNA into eggs. This technique was used in red-eared sliders, resulting in a sex reversal; what should have yielded males, turned out as females. The specific gene being studied is the Kdm6b gene. Scientists found that this gene behaves differently as temperature rises but does not behave the same way in all tissues. So it is suggested that the gene doesn't directly sense temperature, but, receives messages from another gene which reacts to temperature, directing the Kdm6b gene's behavior. A study found that the gene influenced bearded dragons' sexual fate.

I find this study interesting because before owning a bearded dragon, I did a lot of research about this reptile so I could fully understand their needs. They did mention that they can sometimes go through sex reversal which I thought was interesting. While now also owning two turtles, I knew I had to read this article. I would like to find out what other species have a similar gene that can cause a similar event to occur.